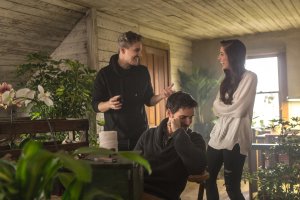 Once Upon a Time... Christina Perri was an extremely lucky gal. Why? Because Captain Hook himself played her love interest in her freshly released 'The Words' music video!

We don't know what Christina had to say to Colin O'Donoghue in order to convince him to strip down for her, but whatever it was, we're glad she did!

Her new video features the Once Upon a Time star in the role of a shy, mysterious, but oh, so manly florist that lives away from the city in the most charming house on the block (pretty sure it's haunted). Christina incarnates his invisible love interest. It's basically 'Ghost' minus the pottery and the questionable hairstyles.

The video was shot over the course of two days in Vancouver by French-Canadian director Iouri Philippe-Paillé (Goooo, Canada!) and we had the chance to speak with Iouri who told us that both stars were super kind and easy to work with.

"Colin was a very down to earth and likable guy, so we all had a good laugh, including Colin, when on the second day of the shoot, he pulled into the driveway in a limousine (thanks to production). We were in the middle of nowhere so the scene was pretty surreal."

"We also went for a Guiness at Colin's favorite Irish pub in Vancouver and he didn't fail to pick on the only guy, our producer, who managed to order a blonde beer."

"Also, Christina being a burger geek, we all jumped on the opportunity to try Vancouver's best burger, not even 10 minutes after wraping the music video."

Oh, and for Once Upon a Time fans, have you noticed that Colin's house also happens to be The Wicked Witch of the West's house in OUaT?! There's also a little hidden shout out for you in there 😉 Katy Perry Has Reason to ‘Smile’ with New Baby, Album Cardi B Wants to Give You a Million Dollars