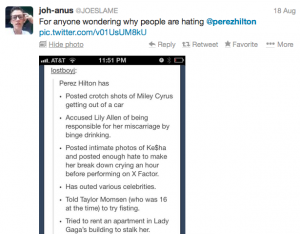 Earlier today we reported on the Gaga-Perez feud that has seen the former besties sending each other angry Tweets with Gaga calling Perez a stalker and Perez accusing her of being cruel and an addict.

Well, it seems like Little Monsters have had enough and they're now airing out their own anger at Perez on Twitter. Some have even threatened him and called his young son ugly.

Too much? We sure think so.